The Sound of the Universe at Your Fingertips 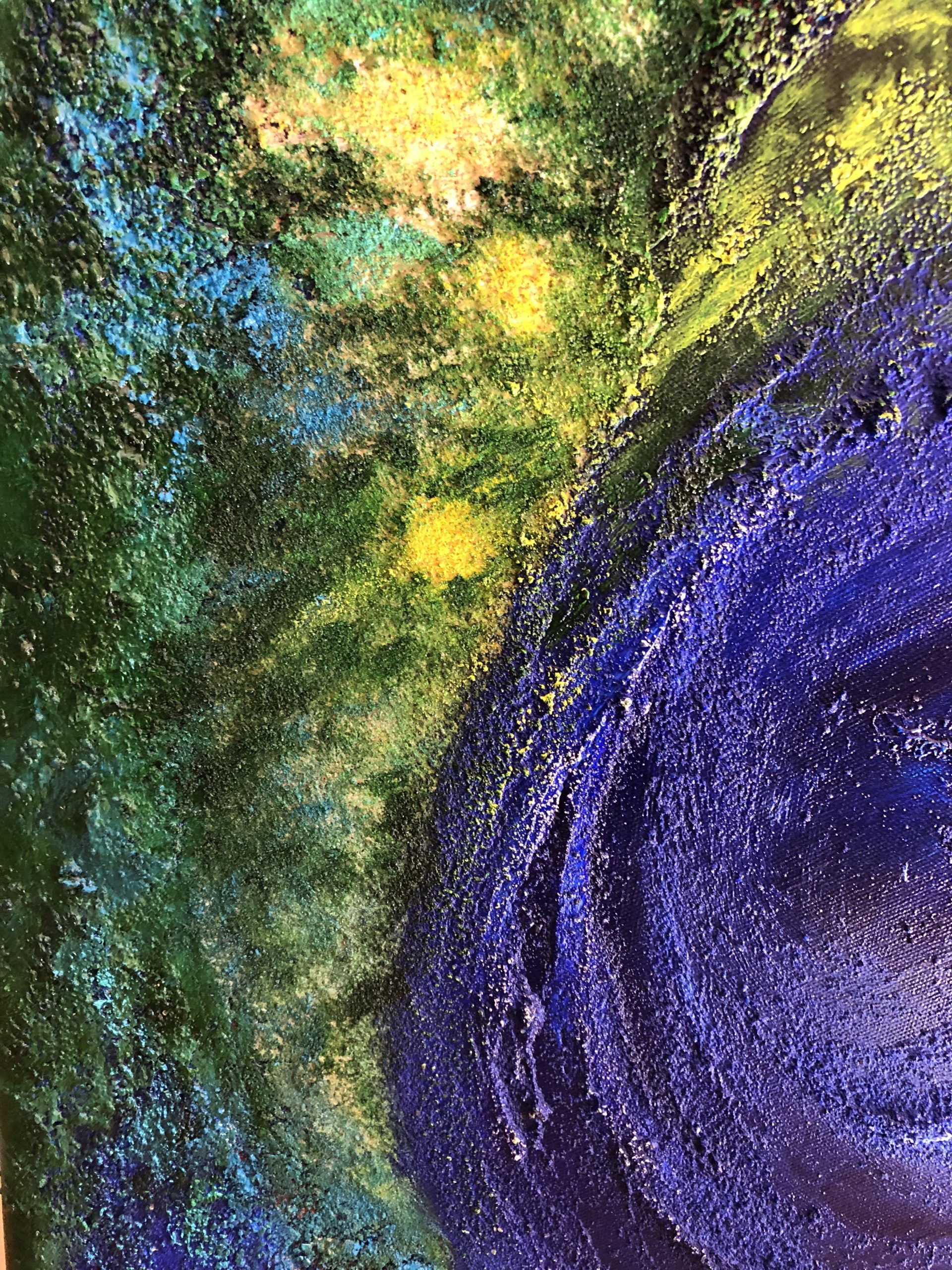 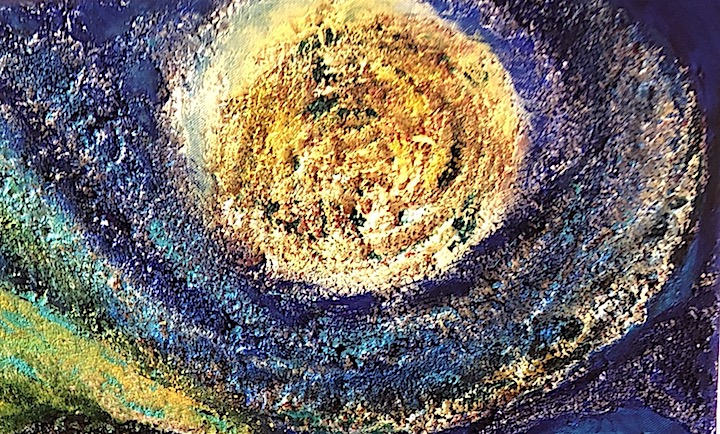 “The piece seemed to take on a Van Gogh quality in the fourth week.” 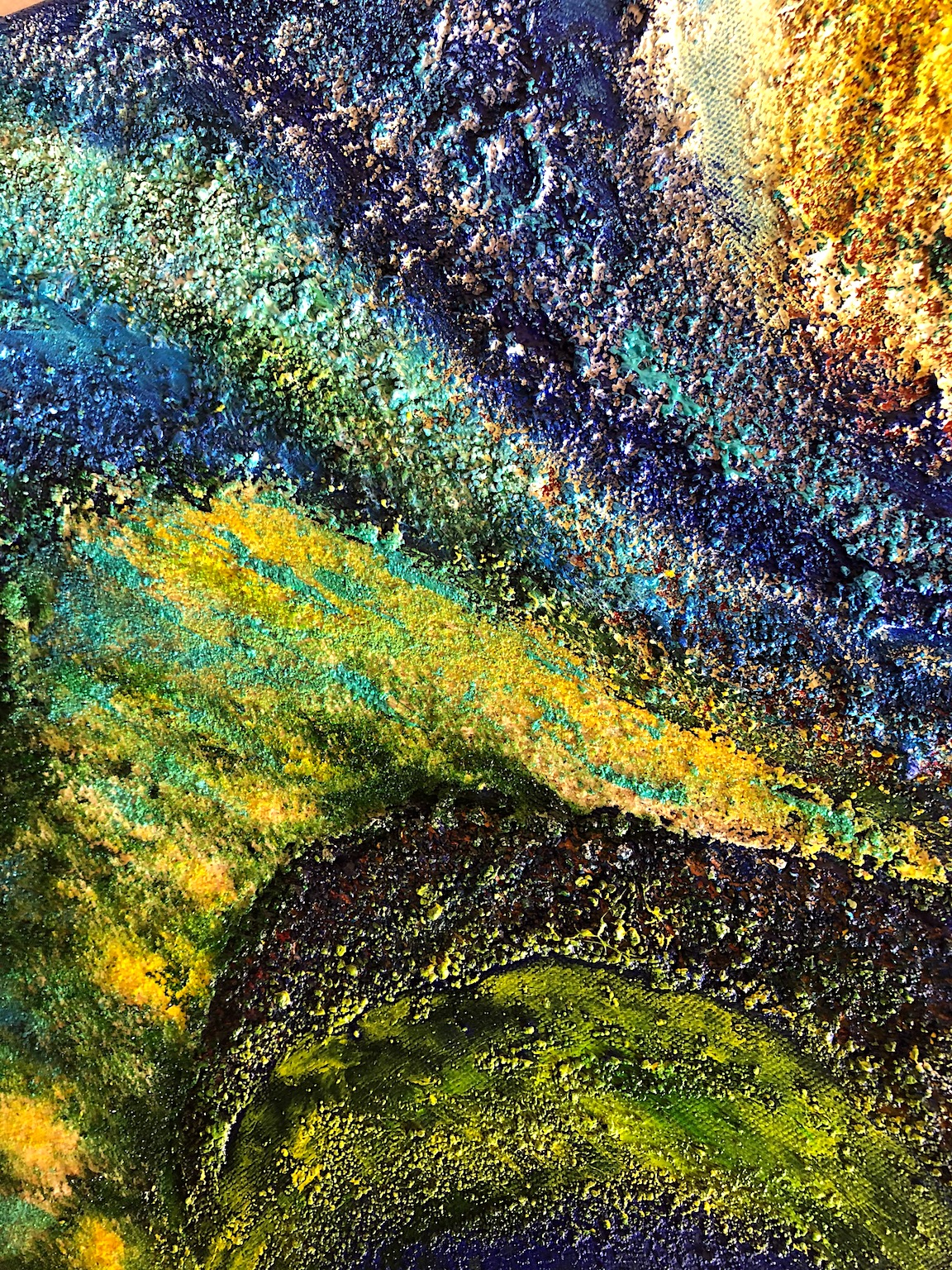 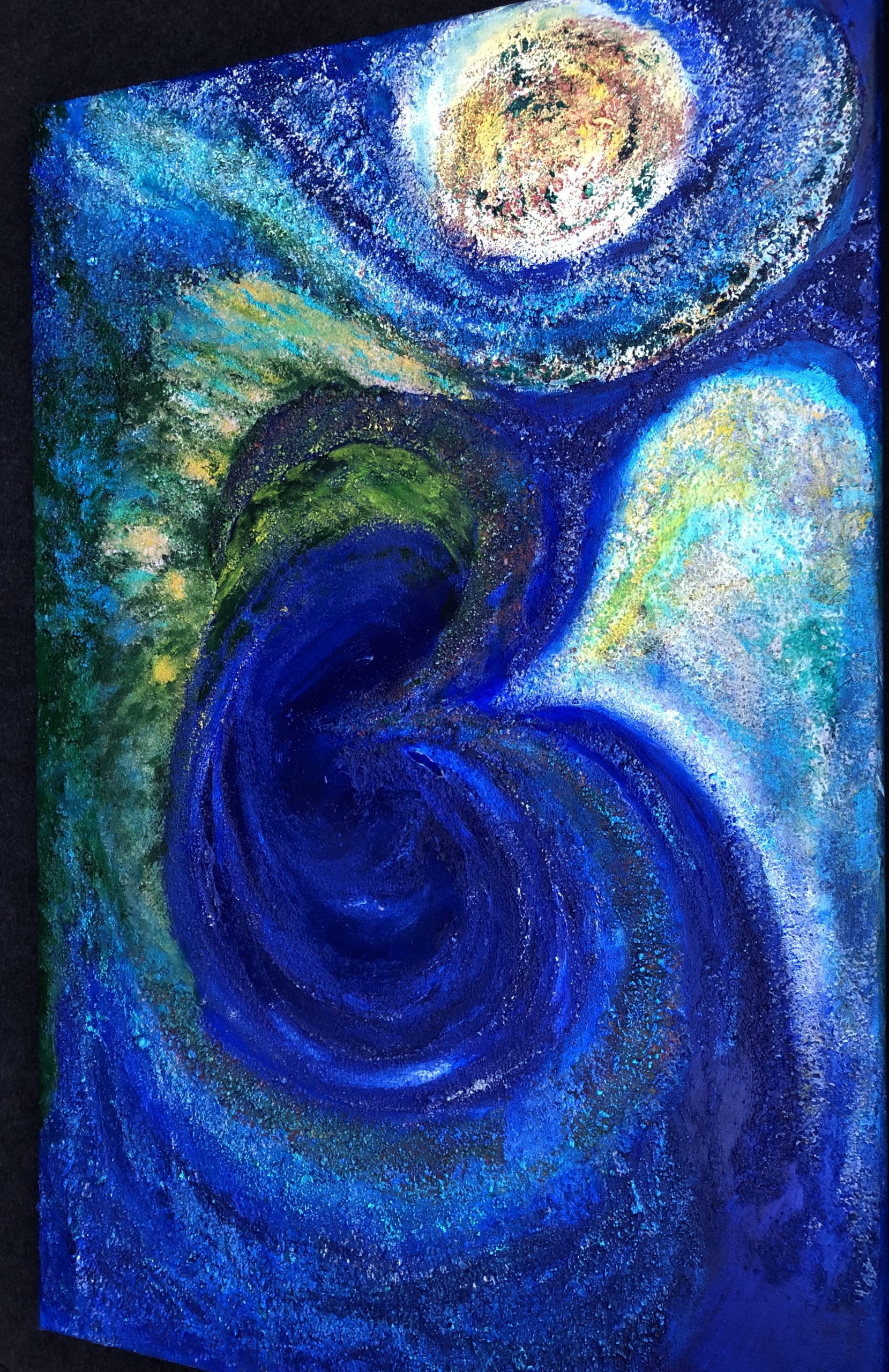 Original, Unframed
Signed
‘The 50,000 AUMs Narrative’ of the piece, written by the artist, is included.

What is it like to Touch the Vibration of the Universe?

SIFTING SERENITY carries the consciousness of a single sound. It captures the vibratory sequence of AUM moving through Mind and Body of both artist and synesthetic viewer. This Sift Painting is meant to be touched and heard as well as seen.

In 2018, Barbara GAEL Condron commenced a daily intentional practice of Omkar in response to a lucid night time dream. OmKar is a yoga practice of sounding 108 successive repetitions of AUM. AUM is the Sanskrit sound recognized in esoteric Eastern religions as the essence of consciousness. Atman. The Self within.

The sands used in this painting were sifted during her private practice over the first nine months of that year.  Every day, her experiences deepened, the reservoir of thousands of hours of meditation over decades.

A meditation practitioner and teacher since 1975, Gael was introduced to the AUM two years later. She frequently used the mantra as a point of focus and this dedicated effort over decades became a cumulative tipping point. In OmKar, each toning of AUM is followed by the restful frequency of silence. In that space, Gael would choose a single pebble from the sands of time. Those pebbles embedded with the healing vibration of AUM were the materials used in this painting.

The assembling of the piece took place over 42 days in the fall of 2018.  The Six Weeks in Serenity.  This timing was intentional. The painting’s creation was a response to a lucid dream Gael recalled that asked this simple question:

“Can we calibrate compassion?”

As a conscious response, Gael initiated the tenth Global Lucid Dreaming Experiment which included 32 people in three countries. The experiment was designed to document the effects of mindfulness practices on the quality of compassionate thinking by singular individuals and by a group of people meeting weekly. SIFTING SERENITY was created during that time.

As the weeks passed, the color scheme changed, from bright colors on the infrared end of the spectrum to neutral greens then cooler shades of blue. The multiple layers on this canvas reflect the depths of the widely-known Serenity Prayer. The version of the prayer Gael used while creating the painting was:

“God grant me the SERENITY to accept the things I cannot change.
COURAGE to change the thing I can.
And WISDOM to know the difference.”

‘Sifting Serenity’ is a literal touchstone
to release the healing potential in
Presence.

“I dream my painting.  I paint my dream.”

The author of two dozen books on consciousness including “What Will I Do Tomorrow: Probing Depression” and “PSIology: Evolutionary Step in Psychology”, Barbara GAEL Condron has dedicated her life to the healing power in our dreams. As she approaches her sage years she says with a smile, “I feel like an amalgam of Annie Besant and Grandma Moses with a bit of Dorothy Gale from Kansas thrown in.”  She will be teaching Sift Art as a means to integrate mind-body cognitive function;– a rich legacy of experiences during her father’s struggle with Lewy Body Dementia.  If you want to learn, contact her at correspond@masterliving.org

SIFTING SERENITY was donated to a VIRTUAL ART AUCTION on October 24, 2020.  In the year of covid-19, the auction benefits mental health organizations.  Learn more by CLICKING HERE. 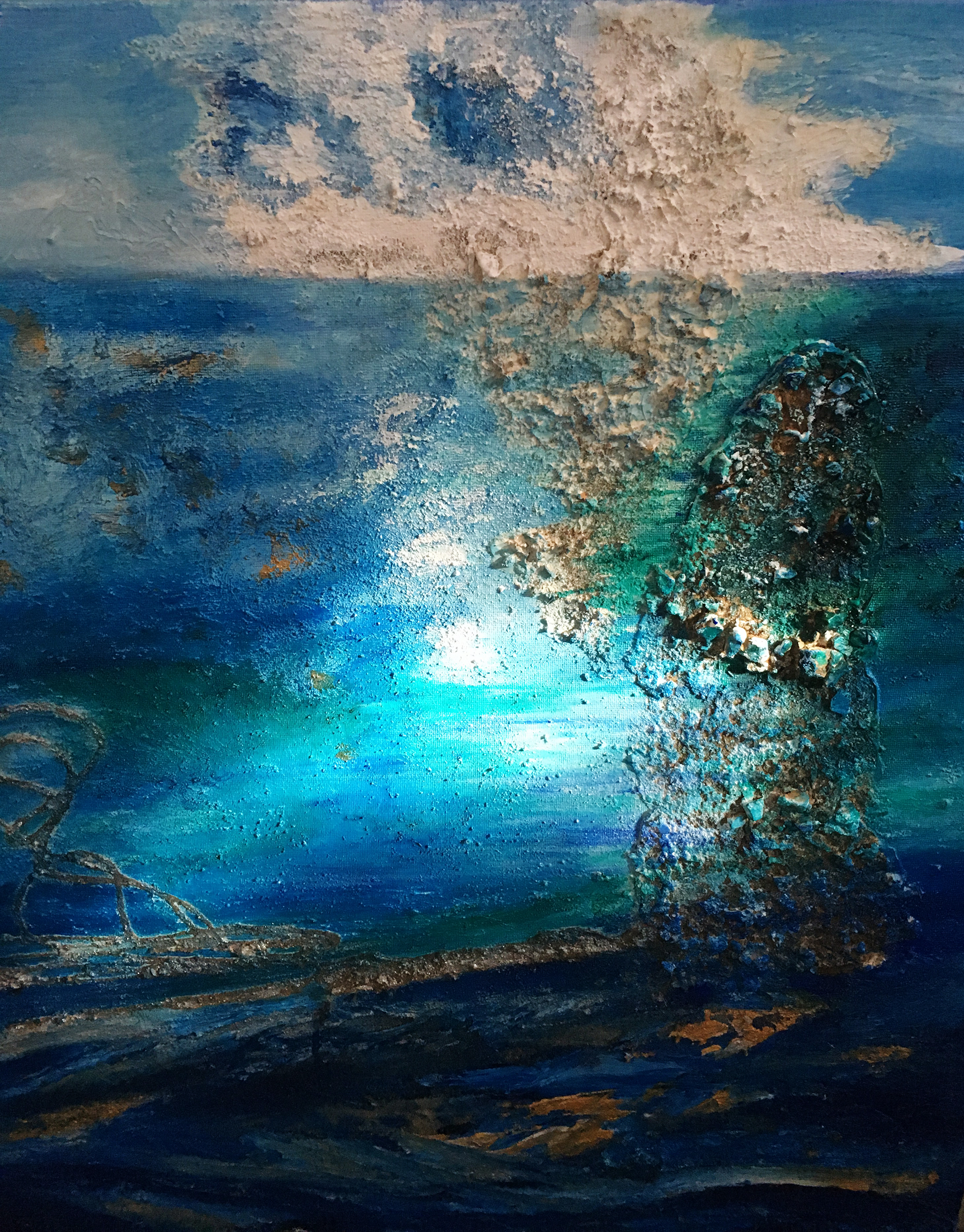 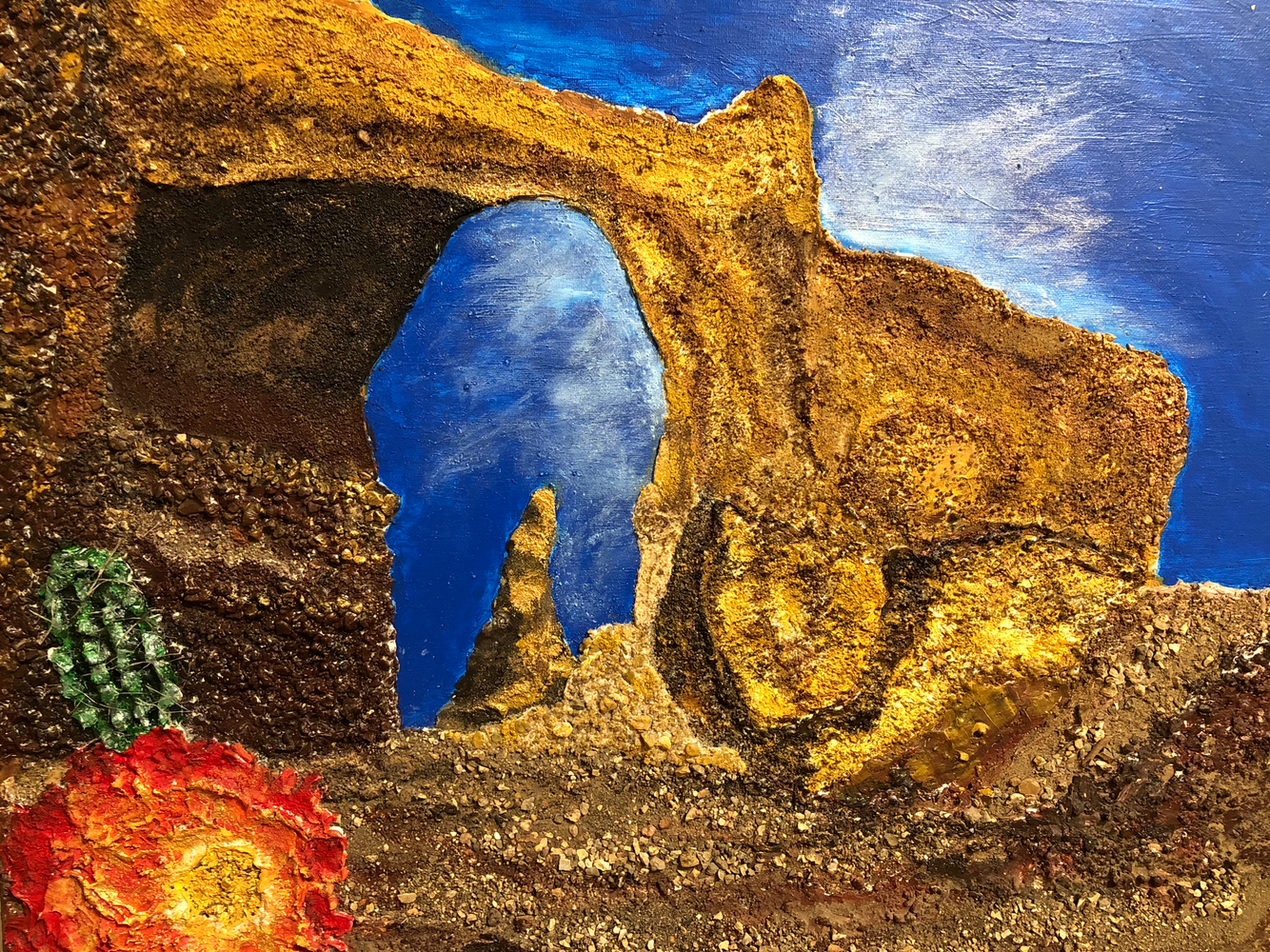